Robert Baldwin was the big winner at the Hell’s Gate Bass Club’s March Tournament . The day started out cold and windy but warmed up nicely as the day went on. Baldwin not only captured the win with a 3 fish string weighing 17.64lb but snagged the Big Bass with an 8.10lder. Mineral Wells Don Welch tied down 2nd place with 12.14 and Grahams Eddie McCracken eased into the 3rd spot. Steve McCain showed that he is returning to form with a 4th place finish and newcomer Al Magg from Breckenridge rounded out the top five. Maag’s 6.84 was good for 2nd place Big Bass.
Bobby Koncak still holds the lead in the Year to Date Tournament, Baldwin vaulted into 2nd, McCain snared 3rd ,Bud Boenisch dropped back to 4th and Eddie McCracken broke into the top 5 in 5th place. Local guide Mike Hallford still holds the Big Bass for the year with his 8.82lb fish.
April 21st at P.K. will be the next tournament. 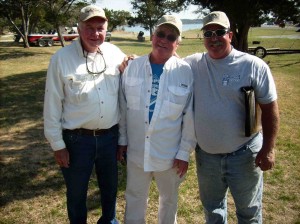