Return to May 2015 Tournament Results

Smith Wins it all

P.K. guide, Barry Smith cleaned up in the Hells Gate Bass Club Tournament fished on Possum Kingdom Lake on May 17th.  Smith won the May Tournament, Champion of Champions, the Top 10 Tournament and the monthly Big Bass competition. In the monthly tournament Smith’s 5 fish limit weighed in at 14.82 lb, Mike Hallford, a guide on P.K. also, netted 4 fish for a total of 13.44 lb while Bobby Koncak grabbed the 3rd spot. Bud Boenisch and Steve McCain rounded out the top 5. The Big Bass competition was closer than it has been in several years, Smith’s 5.21 lb edged out Hallford’s 5.03 lb & Koncak’s 4.91 lber. The Tournament of Champions matched all the winners of the monthly tournaments from 2014. While the Top 10 competition was made up of the 10 anglers who amassed the most points from the 2014 season. Smith, again, edged out Hallford and Koncak. Just shows that there is no substitute for consistency and lake knowledge. Smith said that P.K. is a “Flippers paradise right now”, with the lake level rising covering vegetation there is cover for the fish to hide. Smith said that he had not seen this much cover since the 1980’s added to the fact that the water is stained all the way to Sandy Beach. Buzz baits and frogs also did well according to several competitors. Tony Wallace won the free entry into the June Tournament.

In the Year to Date Tournament, Smith leapt into 1st place, by a mere 5 points over both Koncak and McCain who are tied for 2nd, Hallford and Don welch filled the remainder of the top 5.

The June Tournament will be fished on Possum Kingdom Lake on the 21st from 6.00 am to 3.00 pm with the weigh in being at public boat ramp #1 adjacent to the Harbor.

Picture #1 Barry Smith with 2 of his winning catch. 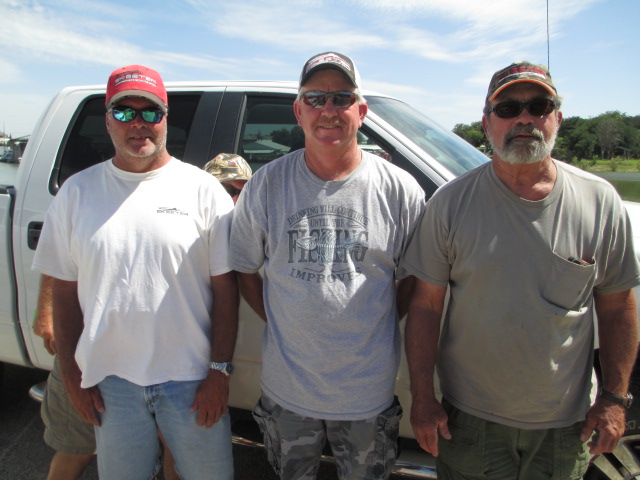