Members of the Hells Gate Bass Club travelled to Toledo Bend Reservoir for their Away Tournament for the year. Toledo Bend is an 181,600 acre body of water in east Texas, compared to the 15,558 ac of Possum Kingdom where the tournaments are usually fished.  “Fishing Toledo Bend is a different type of fishing than we are used to” said Tony Wallace; there is a lot of grass and timber which P.K. does not have. The weather was less than ideal but did not seem to bother P.K. guide Barry Smith who took first place with a 5 fish string weighing in at 13.98lb and the Big Bass of 4.41lb. Steve McCain collected 5 fish weighing a respectable 12.42lb while McCain’s son Ryan, no doubt guided by his Dad, and danced into 3rd place. Bill Pillans, of Abilene & Graham’s Eddie McCracken landed in the 4th & 5th places. Tony Wallace collected the free entry into next month’s tournament. Ric Hayward was the big winner of the Jack Pot Tournament on Saturday.

McCain’s lead in the Year to Date Tournament was reduced again by Smith with only 35 points separating the two with one tournament to be fished. Bobby Koncak remained in the 3rd slot, while Johnny Hicks and Don Welch, neither of whom fished at Toledo, clung onto their 4th & 5th places respectively. Tony Wallace’s 9.18lb Big Bass looks safe as the big catch of the year, but one never knows, “it only takes one cast” Wallace was heard to say.

Featured Picture is of Steve McCain with 2 of his 2nd place string. 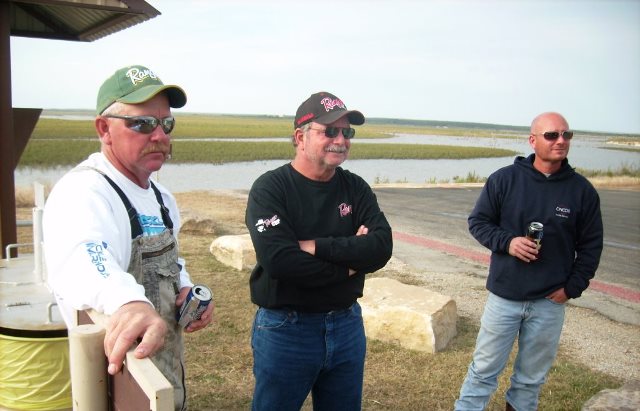